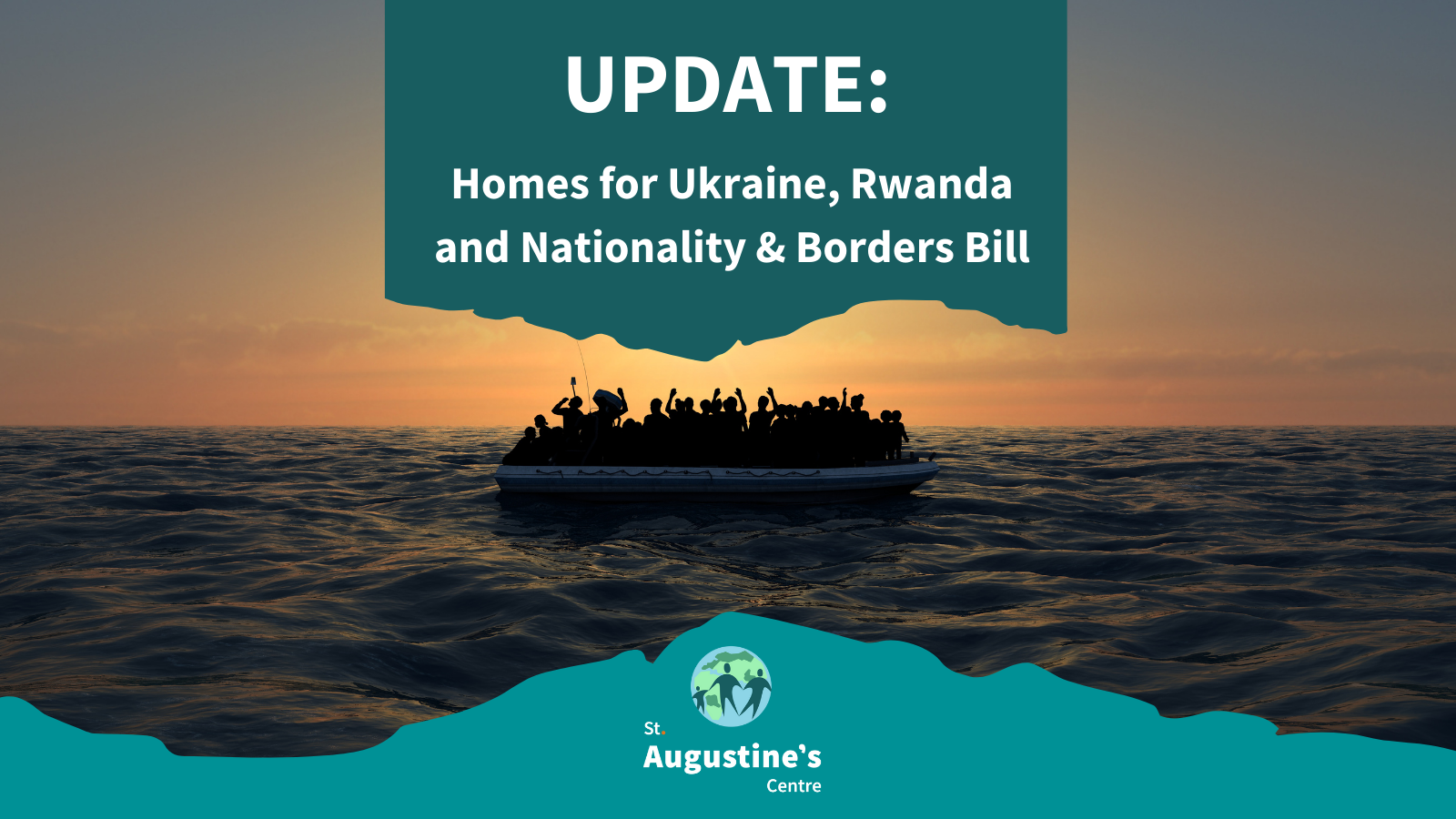 It’s been a confusing few months. Whilst we’ve seen a heartwarmingly large number of people ready to open their homes to people fleeing Ukraine, we’ve also witnessed the draconian Nationality and Borders Bill pass into law and the Rwanda deal announced.

The people we support at St Augustine’s come from 57 different countries. Whether they arrive by boat on the channel, in the back of a lorry, on a plane or via a resettlement scheme – they are all fleeing war or persecution. Every single person who has made the journey here deserves a place of sanctuary whilst they claim asylum and rebuild their lives – indeed it is their legal right under the 1951 UN Convention. So whilst we welcome the Homes for Ukraine scheme (despite its many flaws and needless bureaucracy), it’s tough to know that others seeking sanctuary are being labelled ‘illegal’ and criminalised for simply seeking safety in the UK.  No one is illegal. We have to challenge this kind of language at every turn. This great resource gives us all the facts to do just that.

At St Augustine’s, our focus is on practical day to day support to people seeking sanctuary in Calderdale. Where we can, we will speak out against any local or national legislation or attitude that inhibits our centre members’ ability to build a fulfilling life here.

On the Homes for Ukraine scheme, we know visa delays are causing frustration both for hosts and people fleeing Ukraine (by contrast the EU has waived the need for visas) and there are real fears about exploitation given the ‘DIY’ way in which the scheme has been developed. That said, it has been wonderful to see so many local people and local organisations like Calder Cares 4 Ukraine and the Halifax Ukrainian Club stepping up to help one another provide vital support. Calderdale Council have a duty of care to Ukrainians coming to Calderdale - you can find more information about how they are helping here.

We aren’t currently providing services to people hosting or Ukrainians coming to Calderdale. If you contact us however, we will do our best to signpost you to the right place. For now, with limited capacity, we have chosen to focus on supporting the many others fleeing war or persecution in Calderdale who can’t get help elsewhere and don’t have access to the same benefits and rights as those arriving from Ukraine. Here’s a useful article explaining the difference.

For example, it's galling to know that eight months after the evacuation of Afghanistan, there are currently 11,000 Afghans still in hotels around the UK waiting for accommodation, and there is no sign of the Afghan Citizens programme which promised to evacuate 20,000 of the most vulnerable Afghans to the UK. We provide support to some of the Afghans living in Calderdale, worried about relatives who had worked for the British Government still living under Taliban rule. Many – with the support of Holly Lynch MP – have written to the Government to ask for help, but they have not received responses.

The Government’s gut-wrenching announcement that it will send anyone making journeys by boat or lorry to Rwanda has shaken our community. This is not only a breach of international law, and probably a ‘dead cat pre-election scam’ of a policy, but if its intention was to terrify people seeking asylum, it has worked. We’ve had many texts and conversations with centre members worried they or others will be sent to Rwanda. It’s difficult to know what to say with any certainty in response -  though it's good to know this plan has been dismissed by The Archbishops of Canterbury and York, Teresa May and Home Office staff, amongst others. However, if the Government’s intention was also to stop people travelling by boat or by lorry (and people smugglers), it has already failed. All it will do is push up the price for human traffickers. ‘Deterrents’ don’t work. No-one would risk their lives putting themselves or their children in an overloaded dingy on the channel unless they had no other option.

It is only through a dignified, efficient, grown-up asylum system with safe routes that we can stop these perilous journeys. Enver Solomon of the Refugee Council offers an alternative here.

As for the Nationality and Borders Bill itself, you can read the Refugee Council’s analysis of its potential impact here.

In a nutshell, the bill will:

It would be easy to get despondent, but there is a lot to feel hopeful about.

So we fight on. And for us here at St Augustines, that means we continue to listen and provide support in many forms to our centre members, and where possible, amplify their voices so they can speak truth to power.

If you haven't already, please consider signing up as a regular giver or making a one-off donation to help us continue to help refugees and people seeking asylum in our community.

Our thanks as always to the huge community of people who volunteer and support our work.